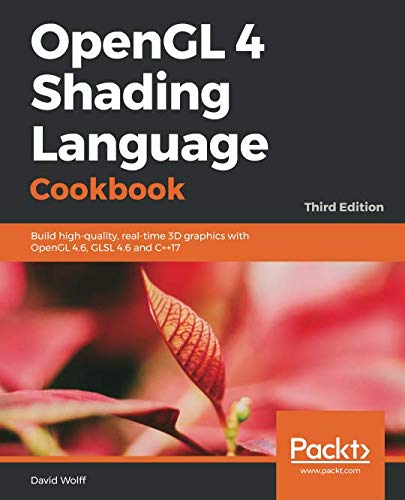 Over 70 recipes that cover advanced techniques for 3D programming such as lighting, shading, textures, particle systems, and image processing with OpenGL 4.6 Key Features Explore techniques for implementing shadows using shadow maps and shadow volumes Learn to use GLSL features such as compute, geometry, and tessellation shaders Use…

Over 70 recipes that cover advanced techniques for 3D programming such as lighting, shading, textures, particle systems, and image processing with OpenGL 4.6

OpenGL 4 Shading Language Cookbook, Third Edition provides easy-to-follow recipes that first walk you through the theory and background behind each technique, and then proceed to showcase and explain the GLSL and OpenGL code needed to implement them.

The book begins by familiarizing you with beginner-level topics such as compiling and linking shader programs, saving and loading shader binaries (including SPIR-V), and using an OpenGL function loader library. We then proceed to cover basic lighting and shading effects. After that, you’ll learn to use textures, produce shadows, and use geometry and tessellation shaders. Topics such as particle systems, screen-space ambient occlusion, deferred rendering, depth-based tessellation, and physically based rendering will help you tackle advanced topics.

OpenGL 4 Shading Language Cookbook, Third Edition also covers advanced topics such as shadow techniques (including the two of the most common techniques: shadow maps and shadow volumes). You will learn how to use noise in shaders and how to use compute shaders.

The book provides examples of modern shading techniques that can be used as a starting point for programmers to expand upon to produce modern, interactive, 3D computer-graphics applications.

If you are a graphics programmer looking to learn the GLSL shading language, this book is for you. A basic understanding of 3D graphics and programming experience with C++ are required.