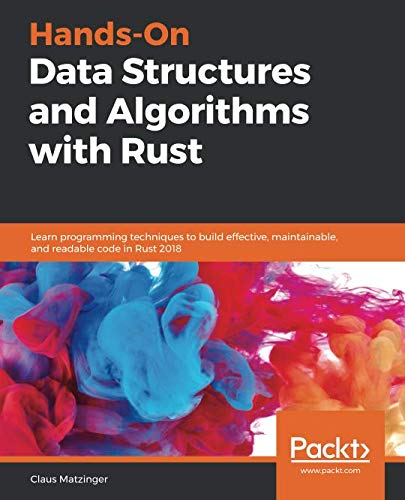 Rust is a multi-paradigm system programming language widely used in developing a variety of new software applications. Its key strengths are its software infrastructure and resource-constrained applications such as desktop, servers, and performance-critical apps, as well as its importance in systems programming. This book is a systematic guide that will explain how to implement classic data structures and algorithms in Rust, and help you become a confident Rust programmer.

The book begins with an introduction to Rust data structures and algorithms, while also covering essential language constructs. You will learn how to store data using linked lists, arrays, stacks, and queues. You will also understand how to implement sorting and searching algorithms. In the later chapters, you will gain insights into achieving high performance by implementing algorithms in string data types and hash structures in algorithm design. Finally, this book focuses on algorithmic techniques such as dynamic programming and backtracking along with algorithms such as brute force algorithms, greedy algorithms, and divide and conquer algorithms.

By the end of this book, you will have learned how to build components that are easy to understand, debug, and use in different applications.

This book is for developers who want to use Rust solutions in a practical and professional setting and learn essential Rust data structures and algorithms. Basic knowledge of Rust and some experience in other programming languages is required.