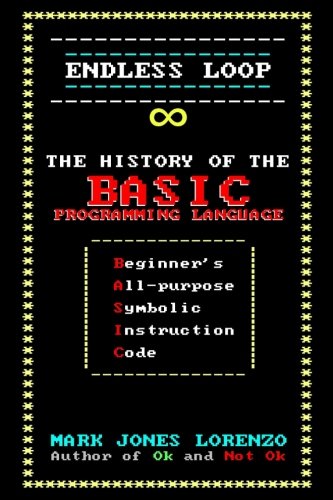 "Endless Loop" chronicles the complete history of the BASIC programming language--from its humble beginnings at Dartmouth College, to its widespread adoption and dominance in education, to its decline and subsequent modern rebirth. In the early morning hours of May 1, 1964, Dartmouth College birthed fraternal twins: BASIC, the Beginner's…

“Endless Loop” chronicles the complete history of the BASIC programming language–from its humble beginnings at Dartmouth College, to its widespread adoption and dominance in education, to its decline and subsequent modern rebirth. In the early morning hours of May 1, 1964, Dartmouth College birthed fraternal twins: BASIC, the Beginner’s All-purpose Symbolic Instruction Code programming language, and, simultaneously, the Dartmouth Time-Sharing System (DTSS). It hadn’t been an easy birth, and the gestation period was likewise difficult. BASIC was primarily the idea of one man, mathematics professor John Kemeny, a brilliant Hungarian mathematician who had once been an assistant to Albert Einstein, while the DTSS satisfied the vision of another, mathematics and statistics professor Thomas Kurtz, who had brought a democratizing spirit to Dartmouth’s campus in the form of free computing for all. BASIC and DTSS caught on at Dartmouth quickly, with a vast majority of undergraduates (and faculty) making use of the computer system via teletypewriters only several years after its inception. But by the early 1970s, with the personal computer revolution fast approaching, Kemeny and Kurtz began to lose control over BASIC as it achieved widespread popularity outside of Dartmouth. The language was being adapted to run on a wide variety of computers, some much too short of memory to contain the full set of Dartmouth BASIC features. Most notably, Microsoft built its business on the back of ROM-based BASIC interpreters for a variety of microcomputers. Although the language was ubiquitous in schools by the early 1980s, it came under attack by such notables as computer scientist Edsger W. Dijkstra for its lack of structure as well as by Kemeny and Kurtz themselves, who viewed non-Dartmouth “Street BASIC” as blasphemous and saw it as their mission to right the ship through language standardization and the release of True BASIC. But by then it was too late: the era of BASIC’s global dominance was over. In “Endless Loop,” author Mark Jones Lorenzo documents the history and development of Dartmouth BASIC, True BASIC, Tiny BASIC, Microsoft BASIC–including Altair BASIC, Applesoft BASIC, Color BASIC, Commodore BASIC, TRS-80 Level II BASIC, TI BASIC, IBM BASICA/GW-BASIC, QuickBASIC/QBASIC, Visual Basic, and Small Basic–as well as 9845 BASIC, Atari BASIC, BBC BASIC, CBASIC, Locomotive BASIC, MacBASIC, QB64, Simons’ BASIC, Sinclair BASIC, SuperBASIC, and Turbo Basic/PowerBASIC, among a number of other implementations. The ascendance of BASIC paralleled the emergence of the personal computer, so the story of BASIC is first and foremost a story–actually, many interlocking stories–about computers. But it is also a tale of talented people who built a language out of a set of primal ingredients: sweat, creativity, rivalry, jealousy, cooperation, and plain hard work, and then set the language loose in a world filled with unintended consequences. How those unintended consequences played out, leading to the demise of the most popular computer language the world has ever known, is the focus of “Endless Loop.”